The Unknown History of MISANDRY

Della Sorenson, Nebraska Serial Killer: “I had a feeling of elation and happiness” – 1925 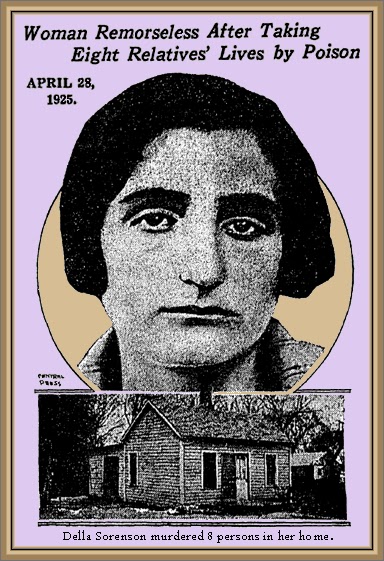 (Article 1 of 2): St. Paul, Neb., April 20. – Mrs. Della Sorensen, 28, who yesterday confessed the killing by poison of seven persons, including two of her own children and her husband, probably will never be tried on charge of murder.

County Attorney Dobrey announced last bight that an investigation had shown that Mrs. Sorensen was mentally unbalanced and that she would be placed in the State Insane Asylum. If she should be released from the institution “within two or three years” the attorney said, the murder charges could be revived.

The investigation into the series which led to Mrs. Sorensen’s arrest Saturday and subsequently her confession, was started three weeks ago following the serious illness of two small children whom Mrs. Sorensen is alleged to have given some poisoned cookies.

In her signed confession yesterday, Mrs. Sorensen related how she had killed two of her own children, a baby, Delores, and her three-year old daughter, Minnie; the former because her “crying and fretting” irritated her, and the latter because she was ill with St. Vitus dance and “I could do nothing for her.”

Her husband, Joseph Weldam, she said, she poisoned after a quarrel.

Mrs. E. Wilhelmina Weldam, Mrs. Sorensen’s aged mother-in-law, died of poison given by the accused woman, according to her confession, in the summer of 1920, because “she was feeble and childish and a burden. I wanted to get her out of the way.”

Two children of Mrs. Wetzel Cooper, Mrs. Sorensen’s sister-in-law were slain because, Mrs. Sorensen said, she had offended their aunt by “gossiping about her.” The first of these, a little girl, was killed in July, 1918. The second, a four months old baby, was put to death in August, 1922.

“Every time I gave poison to one of Mrs. Cooper’s children, I said to myself, “Now I’m going to get even with you (Mrs. Cooper) for what you have said about me,” the confession said.

On the 20th of February, 1923, came the last of the slayings attributed to Mrs. Sorenson. This was the death of Ruth, baby daughter of Mrs. Christina Brock, whom Mrs. Sorenson confessed she had poisoned “because I felt sorry for the poor child, because its mother did not care for it.

“After the death of my little daughter, Minnie,” the poison slayer said. “I had a feeling of elation and happiness. Then, after I got to thinking about what I had done, I was afraid and tried to hide it. I had the same feeling after the death of every one of those I poisoned.”

This is the only explanation Mrs. Emmanuel [Della] Sorenson has offered authorities regarding the eight murders she admits committing.

Mrs. Sorenson, a dull, commonplace woman, is 25 years old. Her home is a bleak, frame dwelling in Danneborg, Nebr. in this house she killed all of her victims, using poison.

The persons she murdered were all her relatives, through blood or marriage, and three were her own children.

It is Nebraska’s most sensational murder case in many years. It closely parallels the case of Mrs. David Cunningham, who is being held in Chicago for the murder of her husband and five children.

Both used poison. The crimes of both were committed at intervals and escaped detection for a long time.

Her first husband, John Weldman, was her next victim. He passed away of poison in 1920. John Weldman’s mother. Mrs. Wilhelmina Weldman, died a short time later from the same cause.

Mrs. Sorenson’s other victims, in the order of their deaths, were:

Delores Sorenson, one year, daughter of her second marriage. February 19, 1924.

Another child, an unnamed infant, sometime in 1924.

“We [Della and husband, Joe] had a quarrel, a bad quarrel, one day. I had it in for him. After he died and I came to, I was sorry for what I had done and wished I had never done it.” [Michael Newman, Bad Girls Do It!: An Encyclopedia of Female Murderers, Loompanics Ltd., 1993, p. 159]

“I had feelings which would steal over me at times forcing me to destroy and kill. I felt funny and happy. I like to attend funerals.”

“Mrs. Cooper was always running down my reputation and to get even with her, I decided to kill three of her children.” [Michael Newman, Bad Girls Do It!: An Encyclopedia of Female Murderers, Loompanics Ltd., 1993, p. 160] 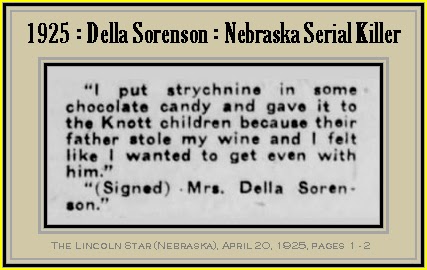